The brand new Seasonal Campaign is inspired by sea-faring Viking raiders. The Northmen seek to re-establish their empire on new and distant shores—heed the battle call in the starting region of the Borderlands or Ungverija and play every week to see their saga unfold. You'll initially have access to 3-Star Units across Siege, Field, and Territory Wars battles, and your power will only grow as the season progresses.

If you're up to the challenge, battle in twice-weekly Territory Wars with your House, complete Stages, and prepare for the final showdown in Reginopolis at the end of the Season.

When the Sons of Fenrir, led by Guthrom Red-Eye, landed on the shores of Ungverija from the Northlands so many years ago, chaos reigned in their wake. As flames engulfed the territories surrounding Vajk's Lake, Guthrom and his Northmen had no qualms when it came to raiding homes and murdering the local populace. Only another Northlander could put an end to this mayhem—the Shieldmaiden Hjordis Ulvarsdottir.

United with the suffering people of Ungverija, the heroine Hjordis repelled the Sons of Fenrir and the Northlanders boarded their longships to head back to their homeland, with a simple warning—if their ships came ashore of the South again, there would be no alliance.

As a new saga begins, so too does a new leader emerge from the shadows. Harald the Slaughterer, a former Varangian bodyguard for the royal family in Reginopolis, returned home to the Northlands to fulfill his destiny and make himself king.

As Harald and his Northmen raid and pillage the Northern and Western coasts from Loegria, and Aelba, trying to re-establish the old Northlands Empire, only time will tell if destiny will overcome. 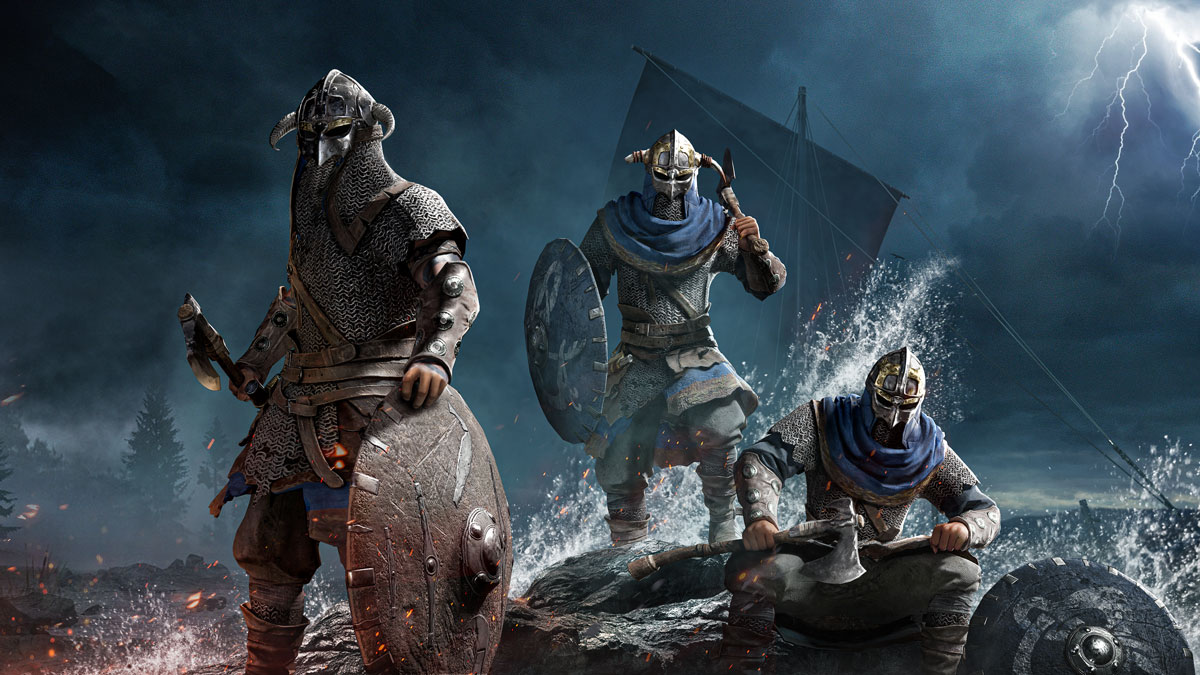 Historically, Viking fighters of old were known for their fierce loyalty, and none more so than the housecarl (in Old Norse, húskarl). These bodyguards of Scandinavian kings and chiefs were disciplined soldiers of great repute and were armed with a variety of weapons.

Huskarls are Harald the Slaughterer's personal guard in Conqueror's Blade and are considered to be among the most formidable warriors in the Northlands, and an inspiration to their comrades. The longer their Skald's Song is sung, the greater its effect on their movement, attack rate, and armour penetration is.

Their unwavering loyalty knows no bounds, and its inspiration extends to their Northlander allies, who will also be bolstered by the Huskarls' dedication to their leaders.

The Viking Age was home to many legendary warriors, but none were as elite in status as the Varangian Guard. The Scandinavian company possessed great military skill, and due to this, amassed immense wealth. Recruited by the Byzantine Empire on the strength of their reputations, these particular Vikings lived to serve, and the riches didn't hurt. One of these illustrious figures was Harald Hardrada, who became King of Norway after serving as a Varangian to fund his bid for the crown.

Varangian Guards in Conqueror's Blade are the defenders of the royal family of the Kingdom of Empyros, and wield swords, shields, and axes to great effect. Handsomely compensated for their efforts, they deterred any threat as they fought their way through the North.

Varangian Guards are equipped with a fierce rage mechanic. They build up their fury, then unleash a terrifying attack upon any foe who dares to cross their path.;

The hammer of the gods will drive your ships to the most well-known lands. Experience reworked versions of fan-favourite maps in Conqueror's Blade: Helheim, including the besieged Broch Eastray, La Grande Gloire, and the Northmen's own ancestral home of Heilung Fjord. Broch Eastray will be available on June 9, with the raiders making appearances on new maps as the Season progresses.

New Weather Condition: Thunderstorms
The third map of the season will come with all-new rainstorm weather. Rain will pour down with thunder and lightning wrought by Thor himself! Prepare your assault under the cover of the storm.

Unit Reinforcements
Special unit reinforcements will be added to each reworked map, and NPC units will spawn for both sides. These will have high damage but low defence, and as the match begins, troops will start to advance immediately for both sides.

Reinforcements start to spawn for both sides after the attackers occupy specific locations. 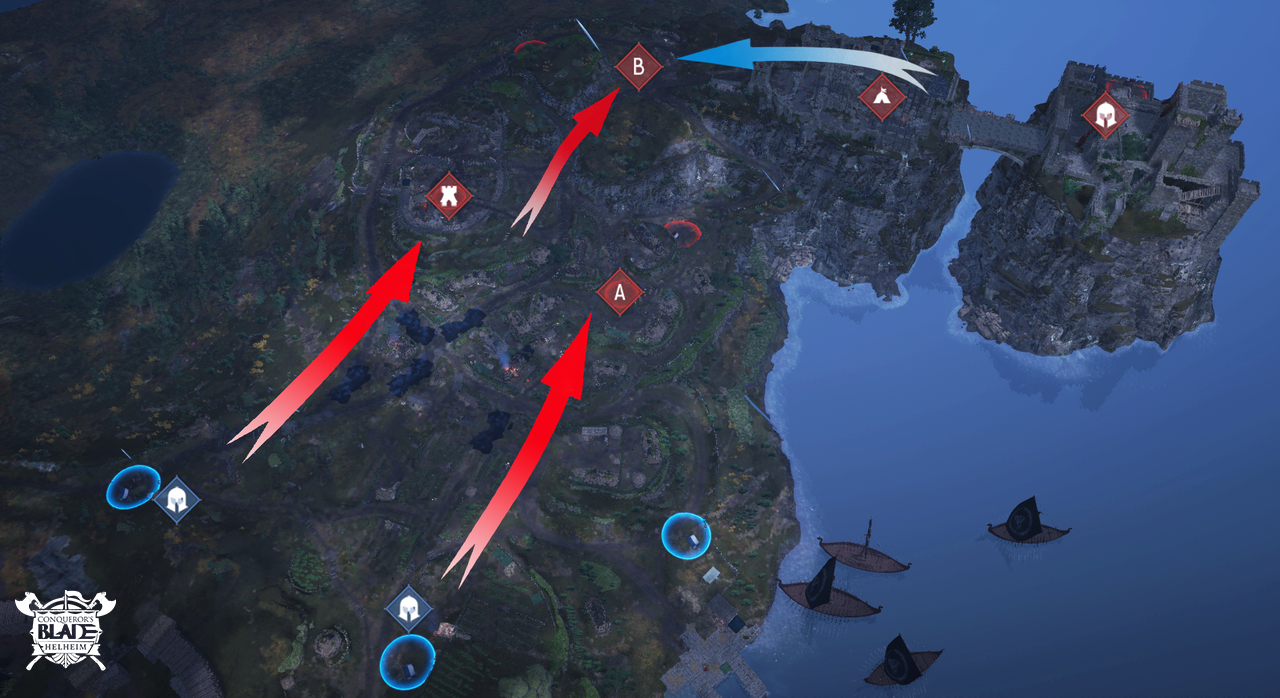 A group of Northlander marauders have attacked the sacred ruins at Broch Eastray, earning the ire of the Highlanders who are again mustering for war! 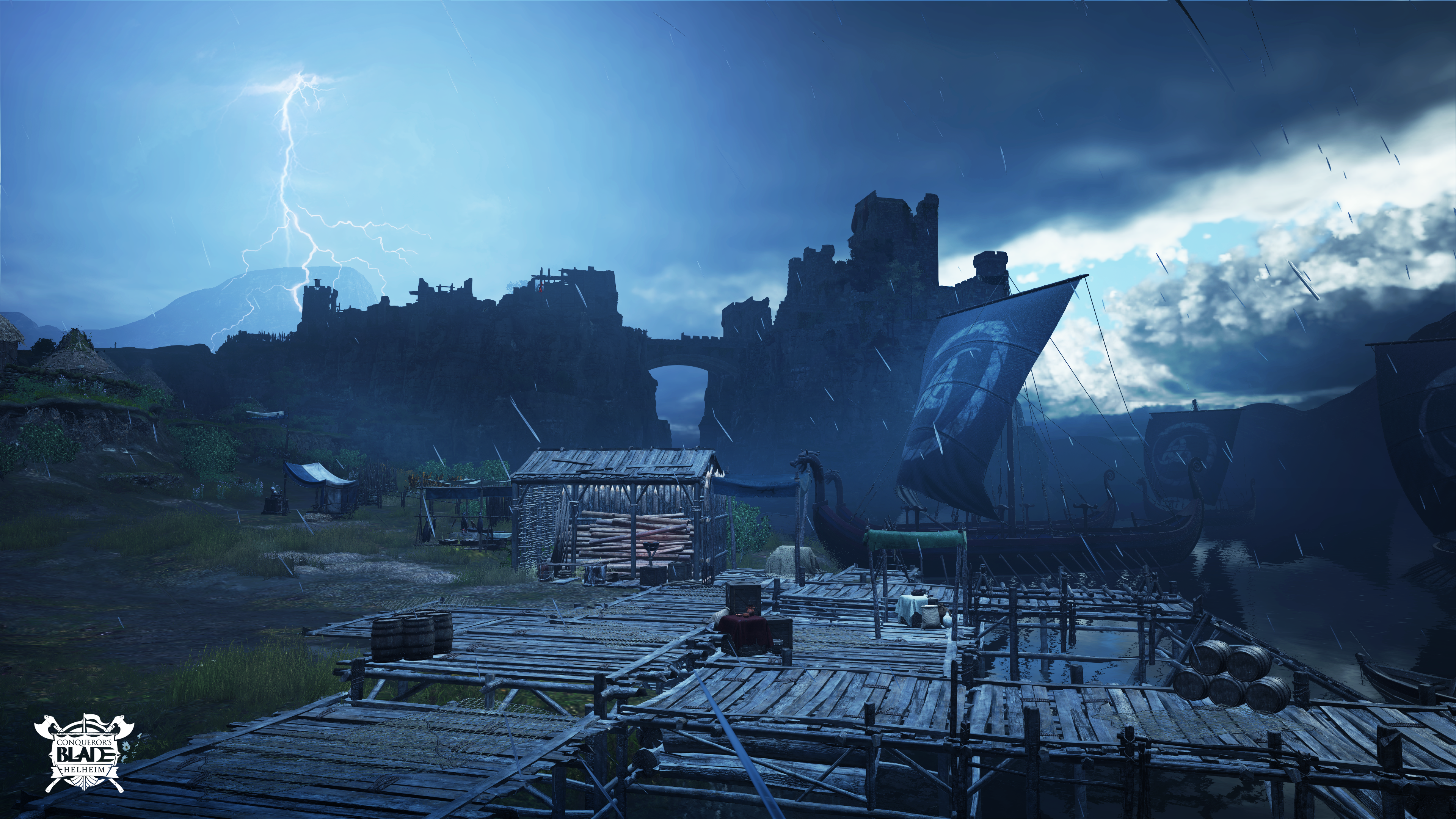 The Norsemen have sailed down the western coast of Pays-de-la-Gloire, and intend to pillage the city of Aurelian. A new raid is about to begin.

On Raid on Aurelian, when the attackers occupy A, combatants from Wolves of Ragnarok will begin spawning to aid their assault. Similarly, the people of Pays-de-la-Gloire (units from Conqueror’s Blade: Paragons) will begin spawning for the defenders. 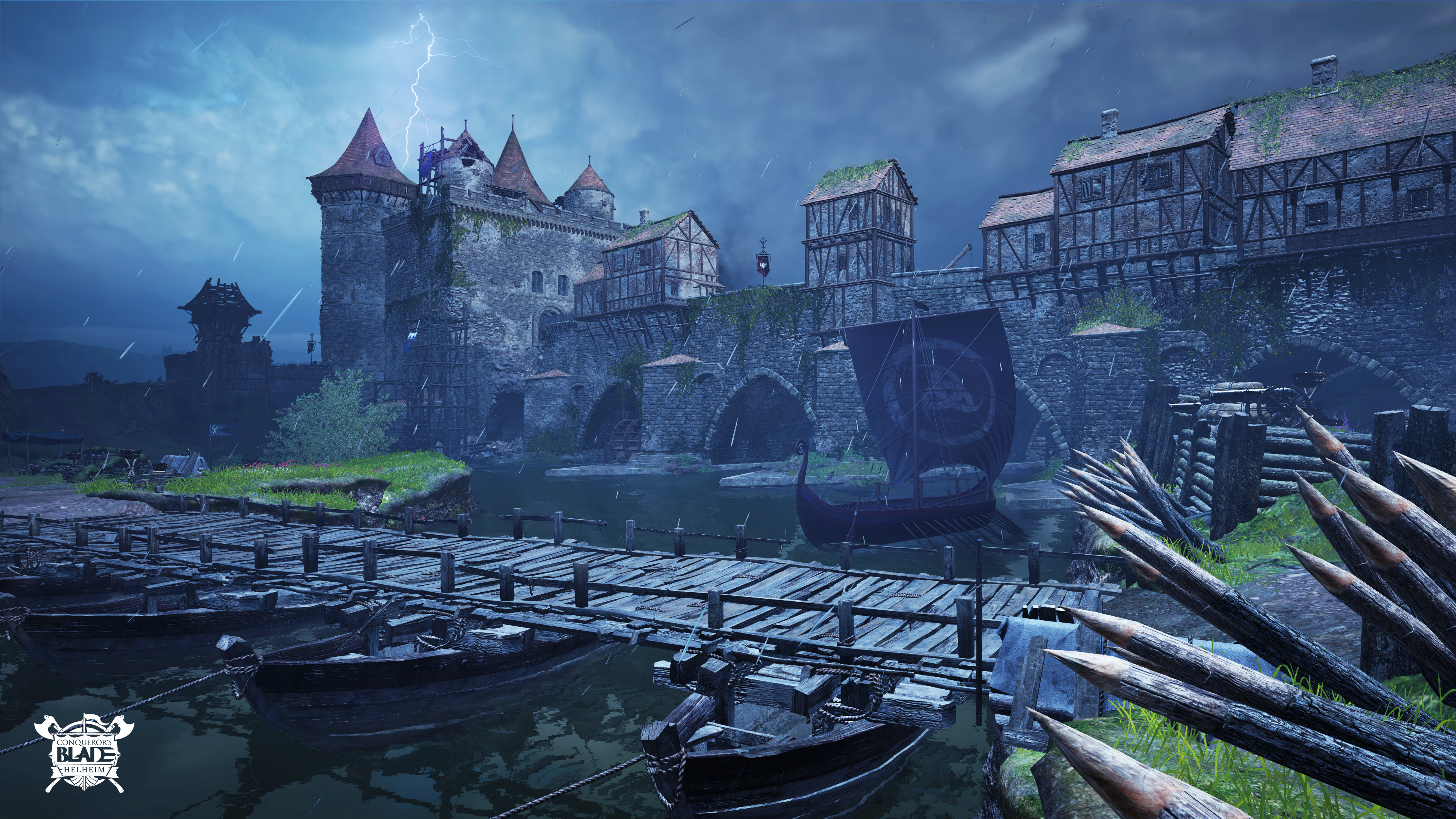 The Northmen's own ancestral home of Heilung Fjord is the final stage on which epic battles will be won or lost. 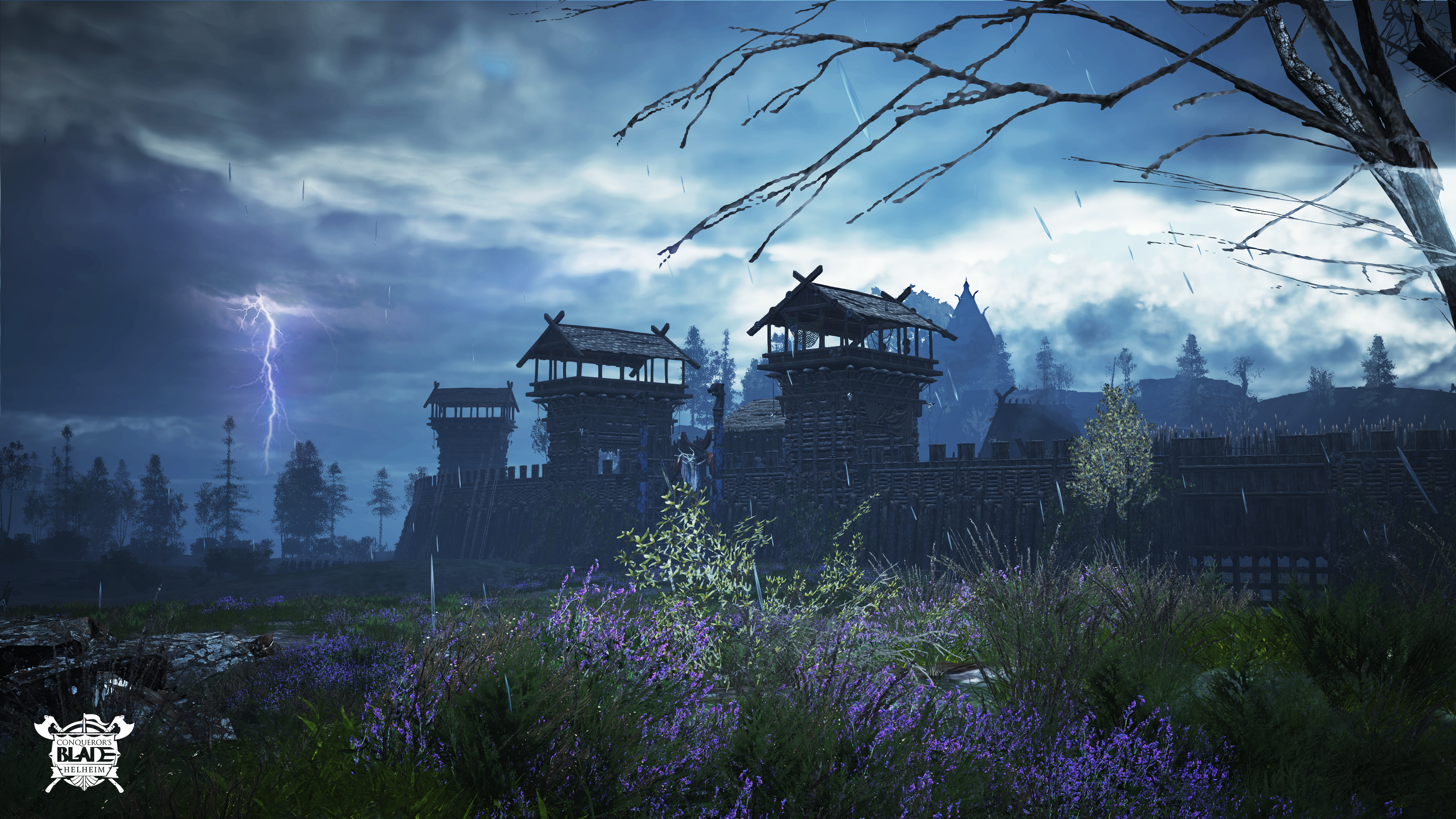 Get ready to wage war in harsh conditions with additional threats on these reworked maps when Conqueror’s Blade: Helheim launches as a free update on June 9!

Preorderthe Helheim Battle Pass to earn exclusive bonus content straight away and when Conqueror's Blade: Helheim launches. The following instant rewards are only available when you preorder the Battle Pass in-game or from MY.GAMES Market before June 9:

Plunder and pillage for exclusive rewards throughout the new Season! At Tier 100 lies the most formidable armour a true Northman could be worthy of—The Bringer of Thunder Attire, inspired by the hammer-wielding god Thor. You'll also be able to don the legendary Loptr's Hide Hero Attire straight away when you activate your Battle Pass on June 9.

IMPORTANT: The Paragons Battle Pass (available in the current season) will be removed from MY.GAMES Market and Steam on June 3.

When Conqueror's Blade: Helheim launches on June 9, so too will the Seasonal Seal System. This system is designed to improve your gameplay experience and journey throughout Seasons by slowly increasing your power and the intensity of the combat you face along the way.

The Seasonal Seal System will limit which Units can be included in Warband Builds brought into battle, the power of Crafted Equipment, and Auxilliary Unit Points available. When higher tier Units are sealed, Heroes will be far more powerful in battle.

At the beginning of the Season, players will start with 700 Leadership. Bonus Leadership will also be available in addition to any other forms of Leadership, giving players a chance to try out different tactical options.

The Seasonal Seal System will be in effect in the following modes:

The Seasonal Seal System will NOT be in effect in the following modes:

Below, you can check which Seals will be available at specific times throughout the Helheim Seasonal Campaign, and study the dates and regions you'll be fighting for:

*Equipment Set Bonus refers to the bonuses that take effect when you have two or four pieces of a specific set.

**Crafted Equipment Affixes are the additional "+ amount" bonuses that you obtain for a specific stat.

IMPORTANT: The Seasonal Seal System will not remove content from player accounts. All restrictions are temporary.

We will continue to deepen the design of this system so players can have a better experience in each stage of Seasonal Campaigns. As always, we will listen to feedback and suggestions from players, and continue to adjust and optimize to ensure a richer gameplay experience.

More information about Conqueror's Blade: Helheim will be coming in the days and weeks before its launch on June 9.  Get the latest news by subscribing to the official newsletter and following Conqueror's Blade on Twitch, Facebook, Twitter, Instagram, and Discord.

Conqueror's Blade is now available to download and play for free on Microsoft PC via MY.GAMES and Steam! 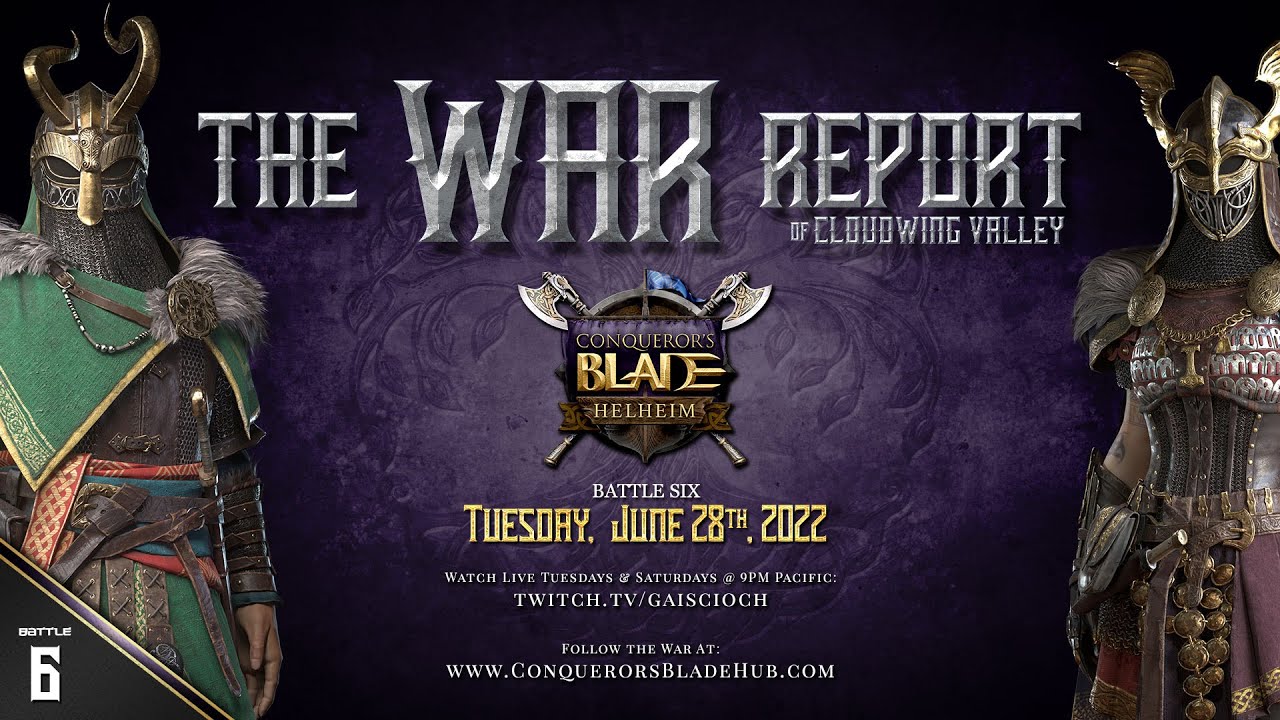 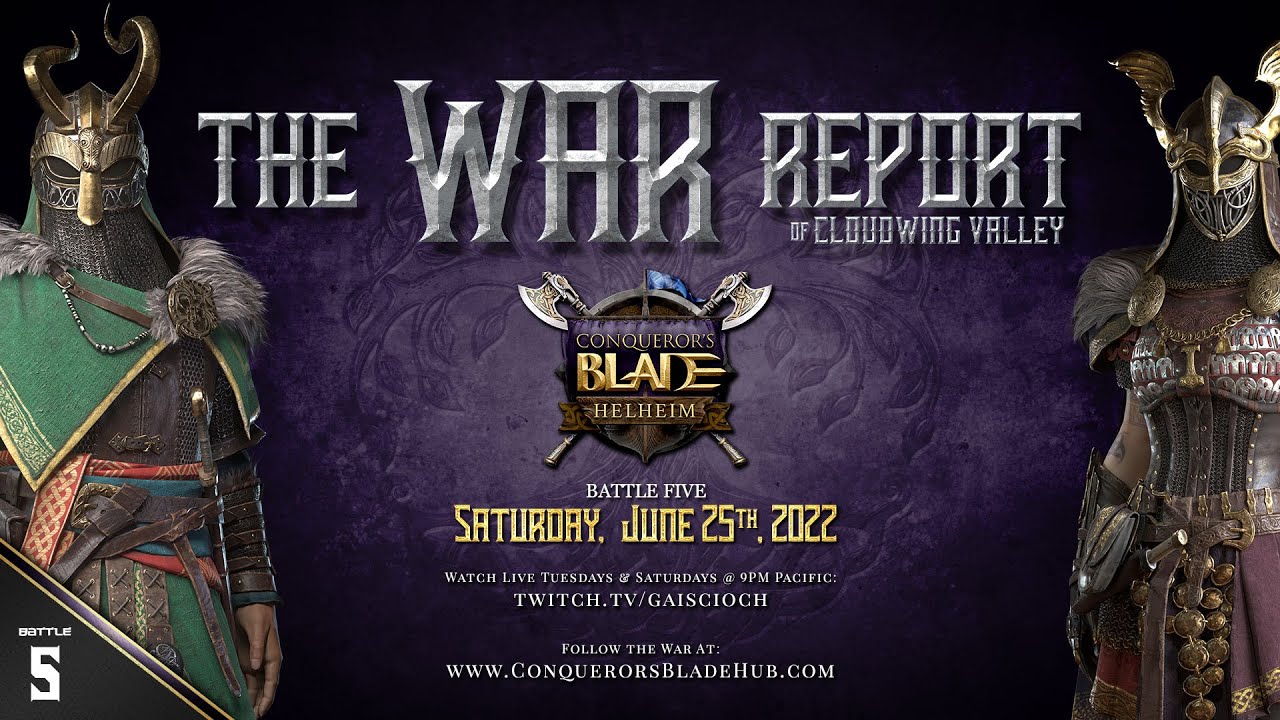 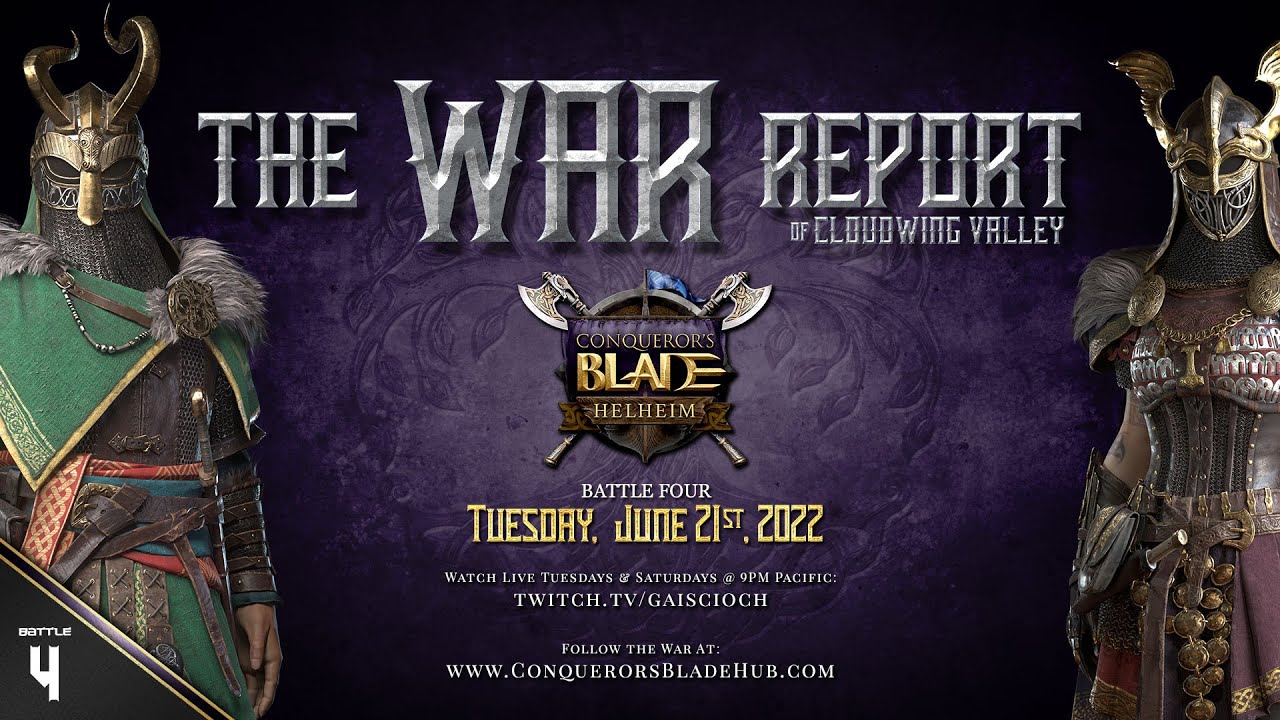 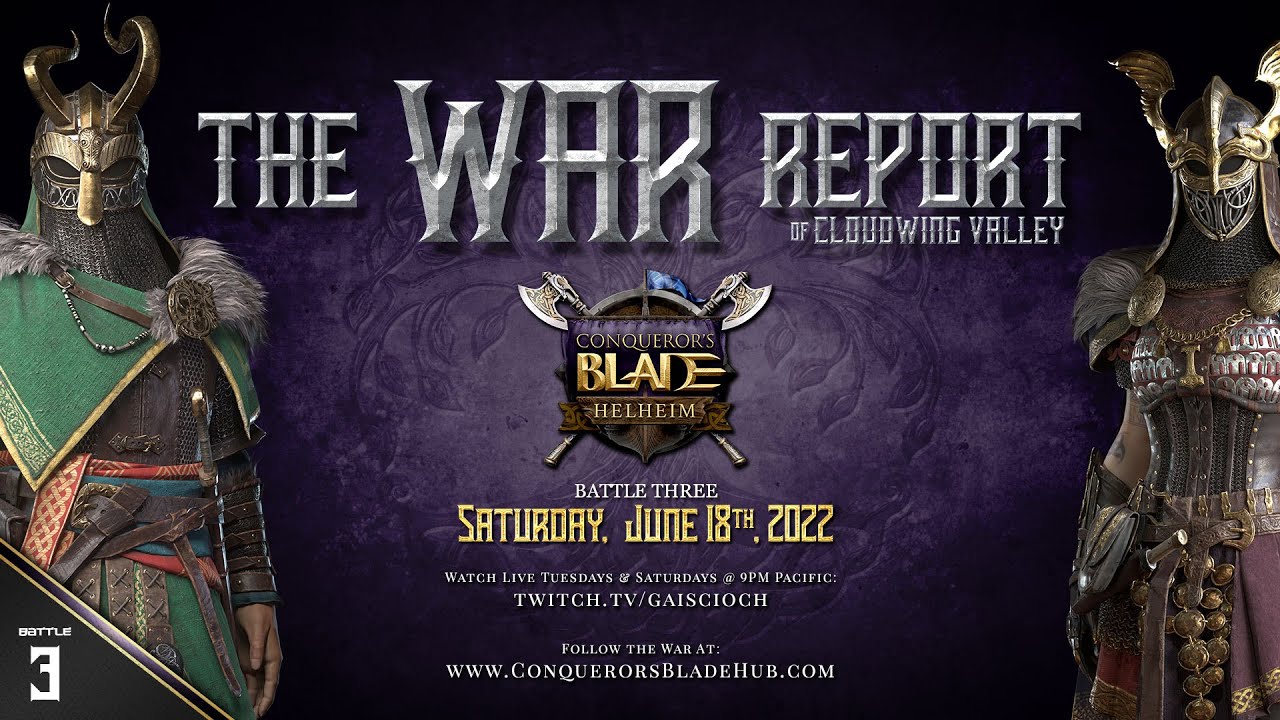 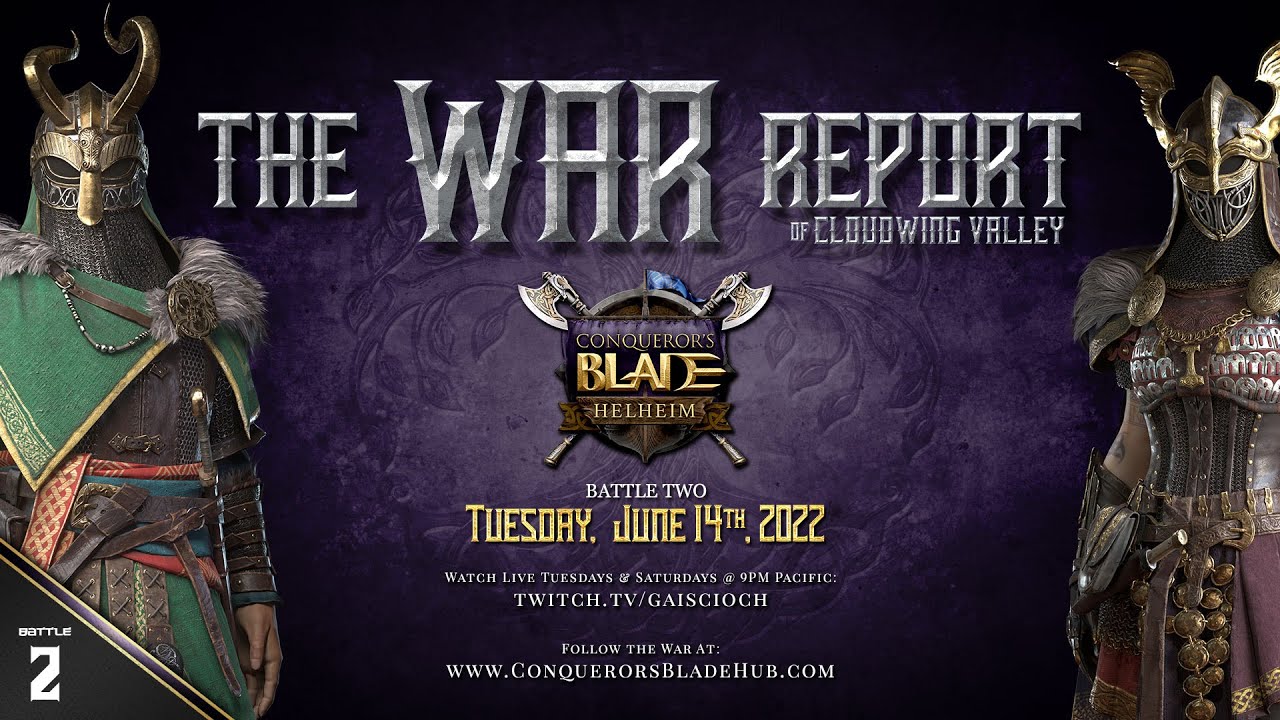 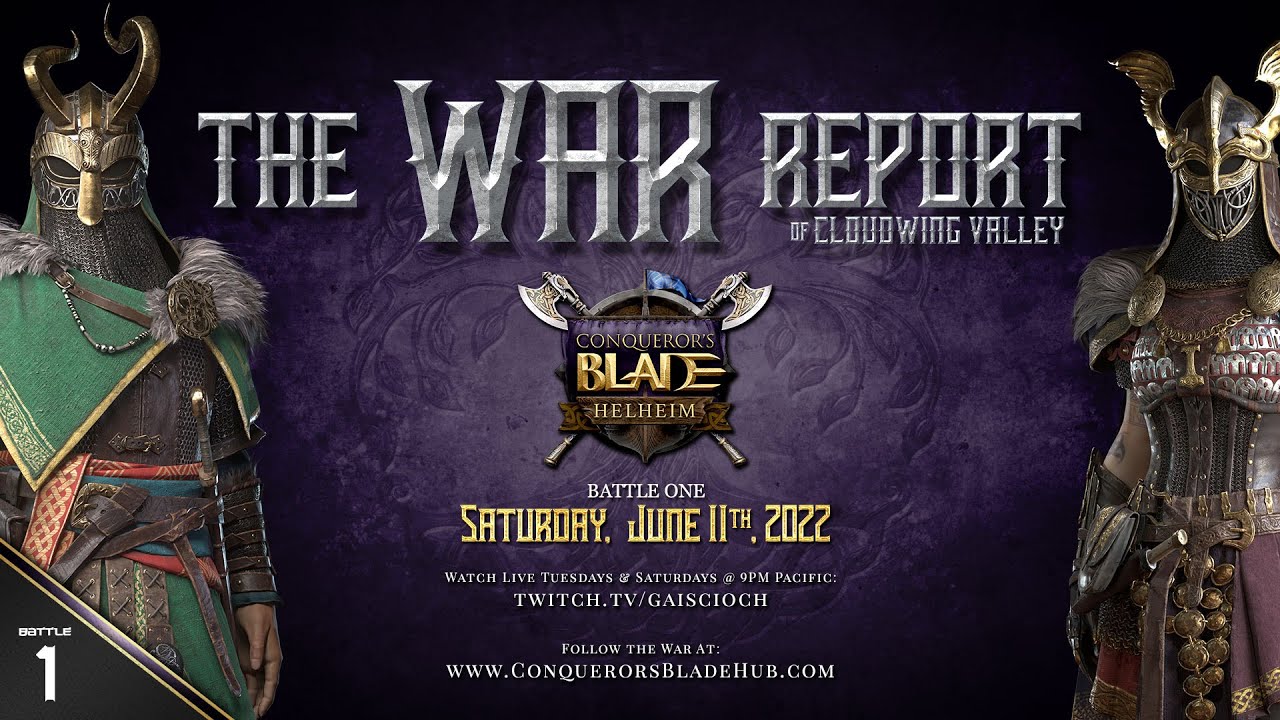