Inspired by the real history of the Tang Dynasty—whose near 300-year rule brought a cultural and cosmopolitan golden age to China—Season VIII: Dynasty features an anthology of stories across a new Campaign, spotlighting crucial moments in time that gave rise to the mighty Qian Dynasty.

Longting. This expansive, golden land is inspired by China and East Asia, influences clear in its architecture, landscapes, cultures, and warriors.

Longting is surrounded by hills and mountains that form natural borders, defences that have long deterred enemies of the ruling Qian Dynasty from launching incursions here. The region borders the nomad-settled Steppes in the north, while its southern and eastern reaches consist of rich, fertile lands that are suitable for farming and herding horses. Its forestry and agricultural industries are of great importance, as many of its provinces rely on the grain grown, wood harvested, and horses bred here for both everyday life and war provisions. The rivers flowing here make it especially easy to transport goods throughout Longting.

The central southeastern parts of Longting are prosperous areas, with the capital of Hao Jing serving as the beginning of the Golden Road, a recently-opened trade route that connects Longting to the wider world of Conqueror's Blade; a vital connection between the east and west. The area is, naturally, filled with merchants selling precious goods from across the known world.

Longting is the new starting region in Season VIII: Dynasty, and at the heart of this golden land lies Hao Jing, the capital city where all players will begin their latest Conqueror's Blade journey.

Hao Jing is the economic and cosmopolitan capital of Longting. The city marks the beginning of the Golden Road trade route that connects Longting to the lands of the west, and as such is a thriving metropolis bustling with trade and life. Many merchants can be found here, with a new influx of travellers and even warlords taking advantage of the hospitality of the Qian Dynasty.

Notably, Hao Jing is the first peaceable Capital in Conqueror's Blade. This is due to its status as a key centre of trade, an agreement signed by every region connected to and served by the Golden Road. The city is not contestable in Territory Wars, nor can it be attacked under any circumstances. Keep your blades sheathed!

Behold Hao Jing's stunning architecture as you explore its streets, climb its towers, and meet its denizens—there are lots of NPCs to interact with, so be sure to say hello!

With a new age of warfare dawning, we’re upgrading our arsenal. The roster of available Weapon Classes will soon expand to 12 with the introduction of the Pike! This thrusting spear can dish out long-reaching attacks to keep enemy units out of melee range, while its devastating combos hammer the point home.

The pike is one of the most important defensive weapons in the entire history of warfare. Evolved from the humble spear to better deter cavalry units with their heavier, shorter lances (which also evolved from the spear, of course), the pike and its many variants became as ubiquitous across the ancient battlefields of Greece and Rome as during the wars of the Renaissance almost 2,000 years later, when mass-produced firearms finally made the weapon untenable.

The Pike has 3 skills that can be used to make combos by switching the order in which you use them. You can chain together 3 skills, followed by an elite skill and a finishing main skill to make a 5 skill combo. 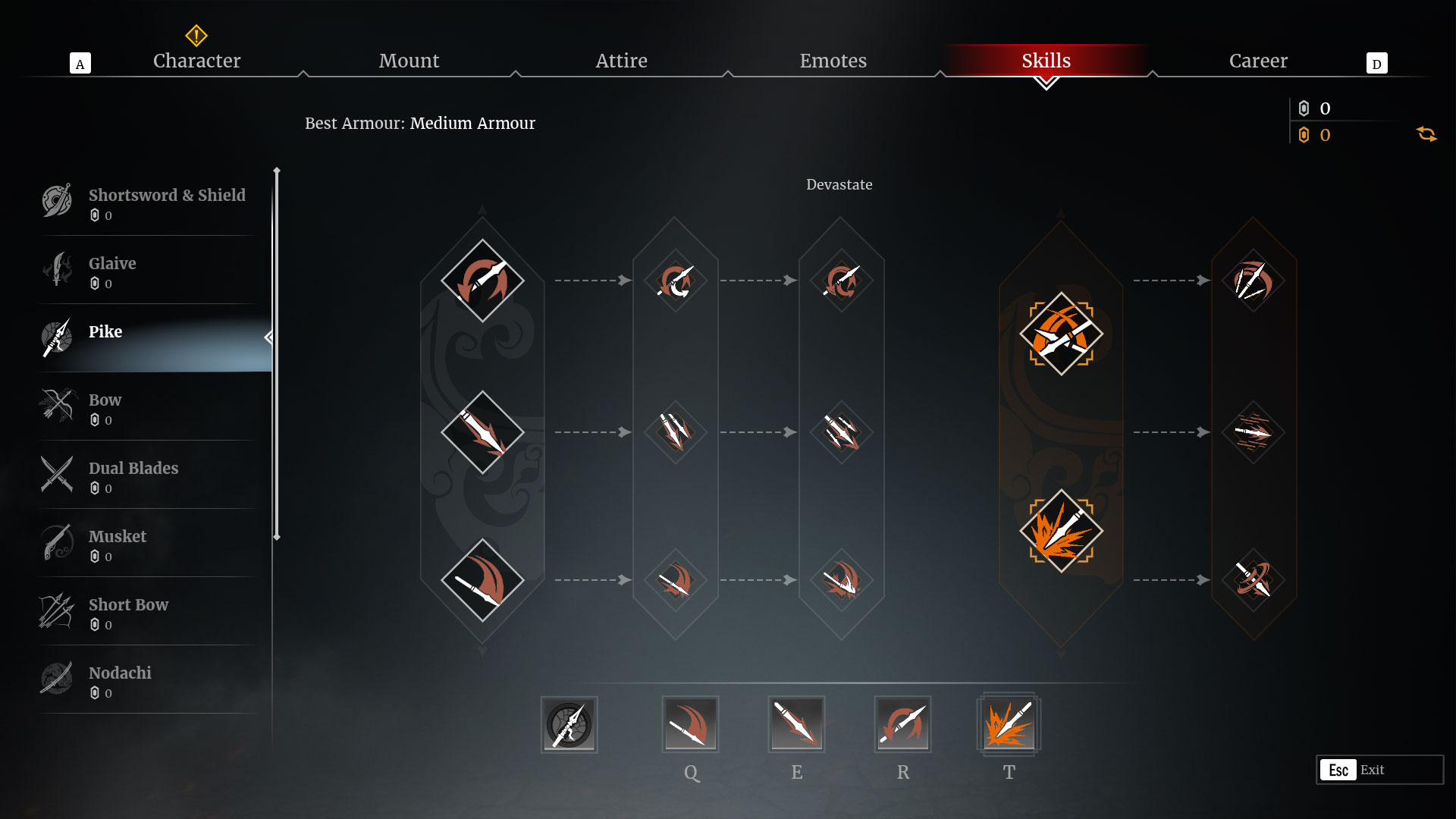 Unlock and command three new Seasonal Units and one new unit to unlock via the unit tree inspired by the heroes and legends of Longting’s history: 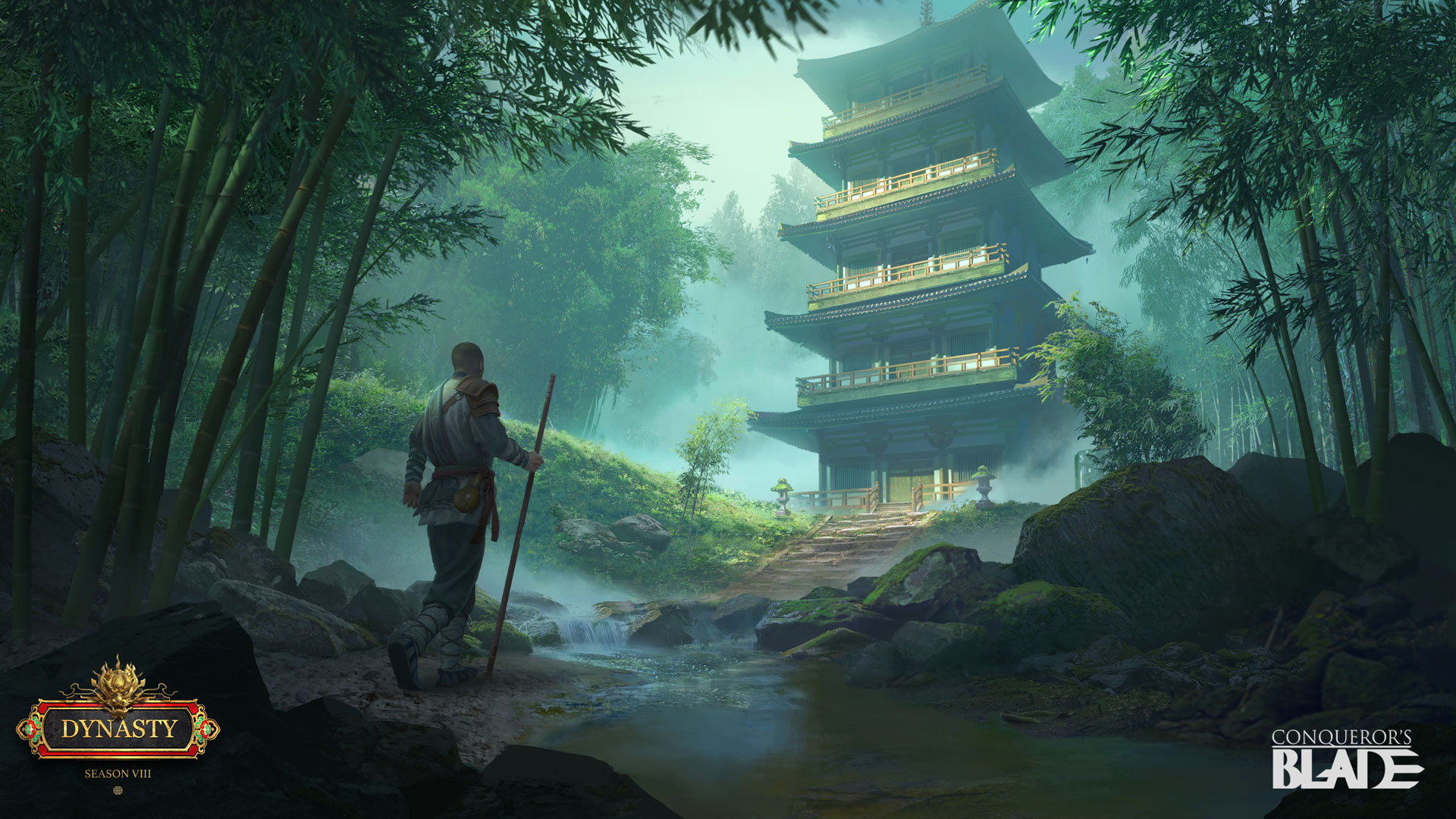 There are many records of holy men and women waging wars throughout history in spite of their faith. Bishop Heahmund took arms in defence of Wessex and was struck down by Halfdan Ragnarsson’s Danes at the Battle of Meretun in AD 871, monastic military orders like the Knights Templar and the Teutonic Order were initially founded to protect Christian pilgrims, and the concept of warrior monks is a common element across Asian cultures. In Sikhism, a Sant Sipahi (meaning Saint-Soldier) is a Sikh who follows the spiritual and martial teachings of Guru Hargobind. In Japan, the Buddhist sōhei were an order of warrior monks born out of and sustained by, periods of imperial rebellion.

Perhaps one of the best-known examples of warrior monks is that of the legendary Shaolin Monastery in Dengfeng, China. The Indian Buddhist monk Bodhidharma was its first abbot in the early sixth century and is credited with training the very first Shaolin monks in what would become one of the world’s most famous martial arts: Shaolin Kung Fu. Though the monks led a largely peaceful, meditative way of life, frequent incursions forced their hand and often saw them fighting invaders off from Shaolin.

In the wake of an uprising and the assassination of the Sui Dynasty’s Emperor Yang in AD 618, the general and future Emperor Li Yuan attempted to retake the city of Luoyang, but soon found himself staring down defeat when his forces were wildly outnumbered by reinforcements. In the midst of the chaos and bloodshed, it was said that 13 Shaolin monks could be seen fighting off invaders in the heart of the city and helped turn the tide to an eventual victory for Li Yuan. The monks were honoured by the new Emperor of the ascendant Tang Dynasty, who granted them the rights to train their warrior monks and dubbed Shaolin a “supreme temple”.

In Conqueror’s Blade, doctrines of harmony have long prevailed in the lands west of Hao Jing, but even a land as harmonious as this cannot enjoy peace forever. The Cudgel Monks, like their historical counterparts, are a monastic order of spiritual warriors who detest war yet fight when they must. These benevolent monks are said to be favoured by the gods and use their blessed martial arts abilities to safeguard those in need. When they come down the mountain and return to the world, they do so to eradicate evil and preserve good.

The Cudgel Monks dress in narrow-sleeved robes, are quick to act and are adept at using staves. Though not as sharp or daunting as a blade, their staves strike swiftly and deal considerable levels of continuous damage. Following a momentum-building charge towards enemies, the Monks can unleash a powerful flying kick to hit hard and break ranks. 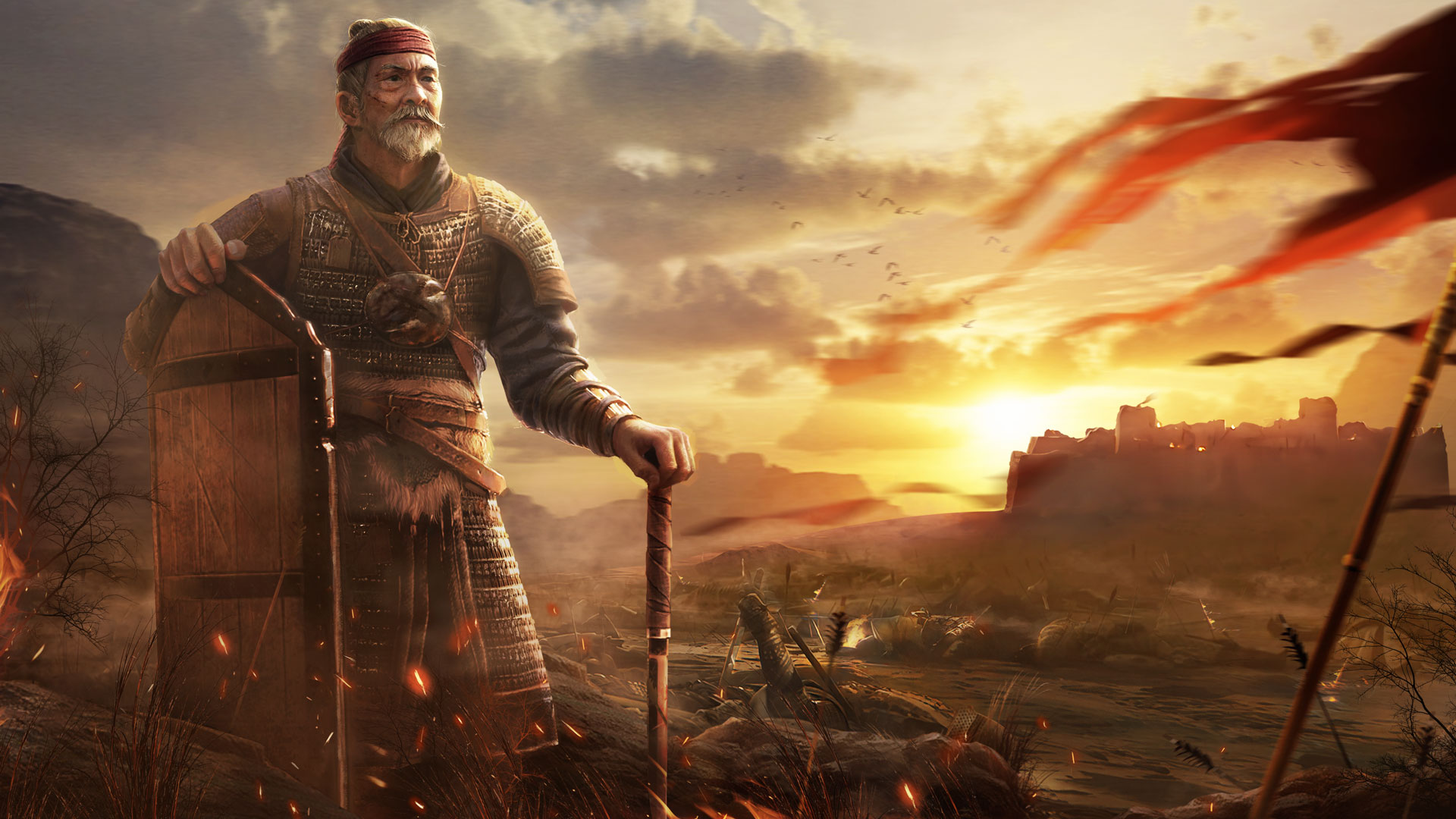 The Golden Road, beginning in Longting’s capital Hao Jing and crossing through the Borderlands, conveys much wealth in both directions. In order to ensure the security of the trade route, the Qian Dynasty’s Emperor built a fort in the desert to deter bandits called Linwu Fortress. As professional soldiers, the men garrisoning it are compensated for their service by the state and dedicate their lives to standing watch over the desert.

As the Qian Empire gradually declined over decades, the people of the Zang Kingdom to the west saw a chance to invade, but they were defeated by Linwu’s warriors on the frontiers. The Zang general attacking the desert fort changed his siege strategy, and instead cut off all supply channels between Linwu and the interior in order to starve the garrison to death. As experienced as these soldiers were, they were helpless in the face of these ruthless tactics. While some died in battle and others of illness, a few weathered the siege… for 40 years. This self-titled Greyhair Garrison guarded the frontier for decades in spite of old age and the ravages of time, and to this day, it’s said that they remain capable warriors who will never back down from a fight.

A great man once said that all good stories deserve embellishment. The legend of the Greyhair Garrison is loosely based on the real siege of Ansi, a fortress-city in the Liaodong Peninsula defended by Goguryeo against Tang forces in AD 645. The Tang Dynasty, attempting to press into Goguryeo, sought to claim Ansi Fortress as a strategic foothold. An early clash between the forces resulted in heavy losses, including horses and cattle, for Gorguryeo’s forces, and succeeded in isolating the Fortress from other territories. The Tang forces then commenced a heavy siege and launched the full force of their engines against Ansi, but their efforts were repelled repeatedly. After three months of unsuccessful attempts to breach the stronghold, and with the weather turning colder and food supplies growing thin, the Tang forces eventually retreated, leaving Goguryeo’s defenders victorious.

The Greyhair Garrison may be long in the tooth, but these soldiers will fight to the last while they still draw breath. They employ spears, swords, and shields to slash, bash, and stun or knock down enemies. When they get into the swing of things, they can increase their attack at the expense of slowly draining their health. However, when their health reaches a critical point, they’ll further increase their attack and receive more health with the more hits they successfully land. 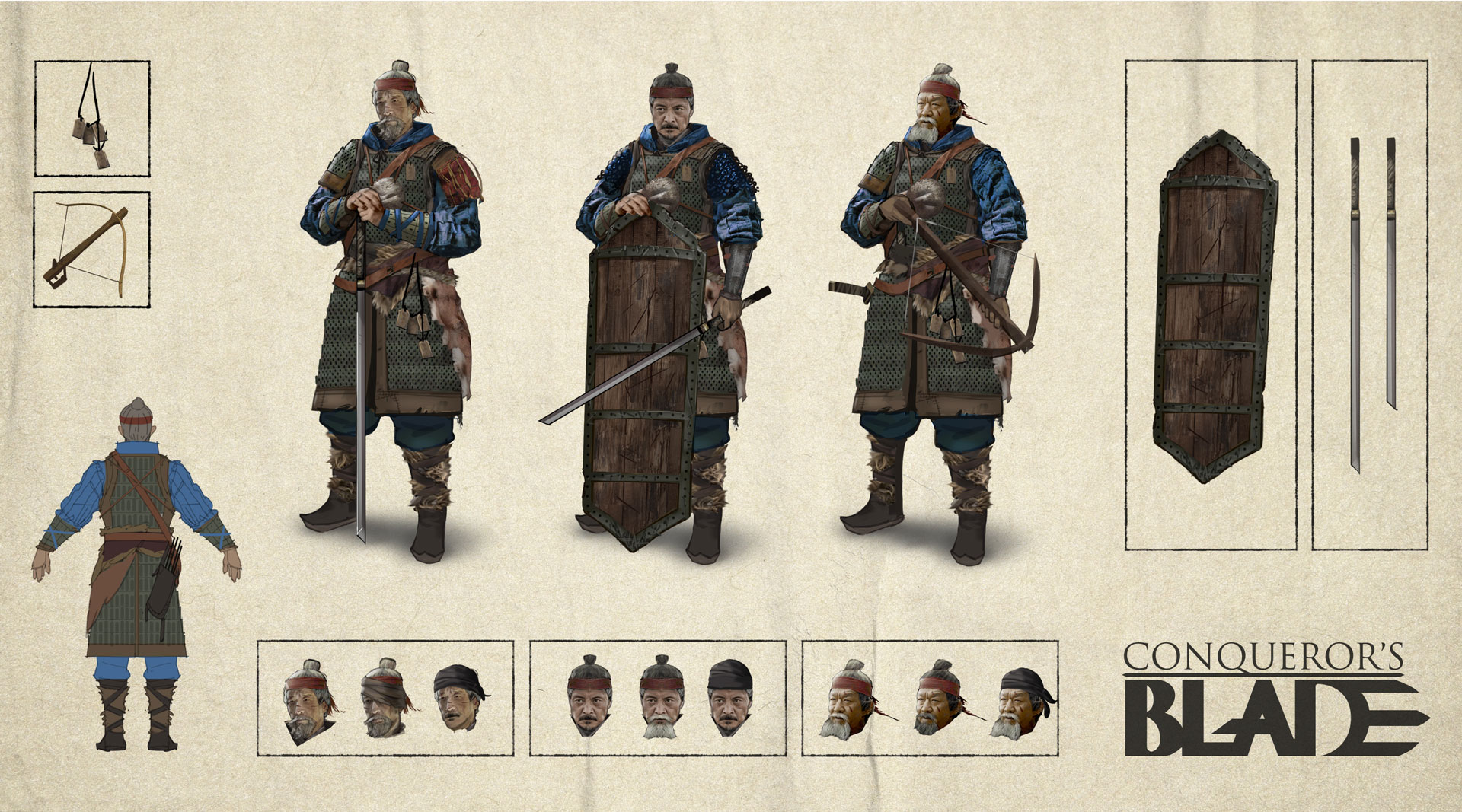 A disciplined and elite force deployed often as first-wave attackers.

Deploy your new warriors to defend or attack Linwu Fortress, a legendary stronghold whose defenders once held out for 40 years in the face of insurmountable odds. This new Siege map invites two teams of 10 players to battle for supremacy over it, and is certain to be the theatre for countless epic battles throughout the season and beyond.

The Season VIII Battle Pass will be available to pre-order from June 24, alongside instant rewards when purchased before July 8. Over 100 levels of Premium rewards await warlords who complete Seasonal Challenges, amass Glory, and level up during Season VIII. Battle to claim the treasures of the Qian Dynasty, from spectacular Hero and Unit Attire to Emotes, weapon skins, and so much more. Conqueror’s Blade is of course a free-to-play game, so if you don’t want to pay, there are plenty of rewards to be found on the Free Pass.

The Rune system introduced in Season VII: Wolves of Ragnarok returns! You can further augment your loadout with all-new sacred relics inspired by Wuxing philosophy and its Five Phases.

During previous versions, auxiliary units were a weekly bonus that provided some manner of strength in battle. Naturally, as you gained more and more power, their relative value and use decreased. That is why we will be upgrading this feature in the new season. Our goal is to make them relevant for Warlords of all levels.

Once we roll out the new changes, Warlords with sealed auxiliary units will have these dismissed. We will be issuing compensation in the form of unit XP for this with the new season, this is issued automatically on the installation of the update.

For more information on Conqueror's Blade Season 8 take a look at the Patch Notes or visit https://conqblade.com/en/seasons